End-to-End Test Automation: Why Was It Worth to Write Our Custom Framework

There are dozens, even hundreds of test automation frameworks available, and we developed our own. Why? Why? Was it worth the effort?

This article describes our needs and our solution, E2E CLI: the architecture of the API testing tool which has been used by our team for about 2 years. Back in 2020, it was developed by me from scratch over the course of a weekend — In other words, it is a very simple piece based on very simple ideas. That first version was supporting 80% of the functionality available today in the last version (and described below). We don’t add features without good reason.

We use this tool to end-to-end test all our services and integration flows. Whenever we make changes to a software system, we need to ensure that they do not break what was already working.

As the architect and lead developer, I designed and developed it from the ground up, so, of course, I am very proud of my brainchild. But the field cannot be well seen from within the field. You know, reinventing wheels is not always bad. When you build something on your own, you are in full control over what is being built, what its purpose will be, and when it is finally conceived and executed as you wish. It has been two years since I have encountered any alternative to our solution.

To reach a wider audience, I found it beneficial to share key concepts hoping to get some feedback from the community and enhance the product.

While the client (for whose benefit the tool is being used) has authorized me to share high-level details, I cannot disclose names or code. In spite of this, the conceptual view should be useful on its own and might become a good foundation for your own solution.

There are a number of APIs in our landscape and many of them are cascaded. Each layer performs some data transformation or data enrichment against the input and pushes the result to the deeper layer. The response from the deeper layer is also transformed or enriched as well before being sent to the requesting system, a browser, or an app orchestrating master data integration.

We needed a tool both for automated and exploratory testing. 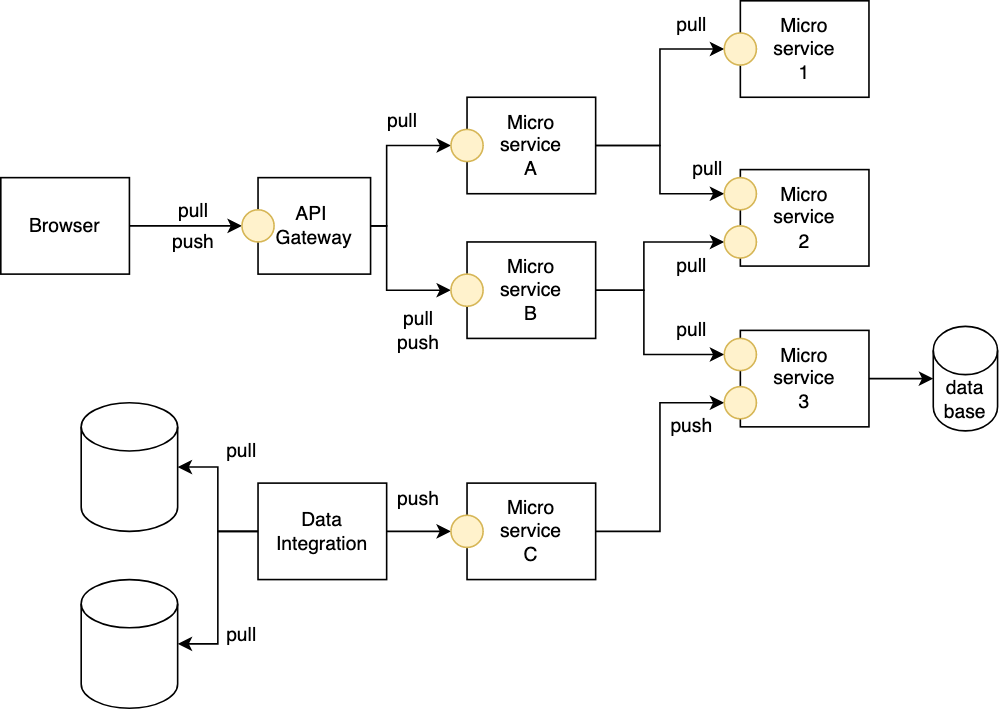 In the diagram, yellow circles represent APIs. In our setup, all of them are RESTful. Almost all of them accept and produce JSONs.

Not all of the APIs are stateless. Some have the internal state persisted in the database.  Not all microservices are under our control, some are legacy (so the API contract or response formats could not be changed easily, for example).

One of such components is SAP Commerce.

Requirement 1. End-to-end.
I needed a tool capable of testing all these distributed APIs in a coordinated manner. I needed to create a test product (via Microservice 3), then check if Microservice B returned this product in the results of the product search API. Also, I wanted to create a product via a service located higher in the hierarchy (Microservice C), then check again if Microservice B returned this product again. If at least one of these tests fails, it indicates that a corresponding flow is broken. If a product is pushed to C and does not appear in B, it indicates that some of the three services (B, C, or 3) are having problems. If a product was pushed to 3 and it doesn’t appear in B, the issue is very likely in Microservice C.

Requirement 2. JSON Templating 1.
Our microservices may have similar-looking data structures in the request and response JSONs, so I wanted to avoid duplicate code to make the dataset error-prone. The simplest solution is a template language for JSON. JSON doesn’t have any mechanism to reference/include JSON in other files, and all attempts to invent it were not successful. It was always ugly and hard to maintain.

Requirement 3. JSON Templating 2.
Some input data might be huge and structures might be very complex. In some cases, JSON files were 300K in size and had a complexity of up to 15 nesting levels. Not all data structures were under our control, so splitting and simplifying, harmonizing and unifying the data formats used in all microservices was really hard. We needed a mechanism to reliably build such JSONs based on some rules to make it easier to develop and maintain the tests. We wanted to avoid building JSONs via code, because such code is error-prone and it will need its own tests.

Requirement 4. Response format aware actual-to-expected comparison (“smart compare”).
We needed to compare the actual response with the expected response. However, byte-to-byte comparison was not the option for us. If we compare JSONs, we should compare structures; formatting should not be important while the JSON is valid. Even the order of the JSON attributes at any level should not be important, just their paths from the root element. In some cases, the order of the array items should be ignored. Including the case when such array items are non-uniform JSON structures having their own arrays and nested levels. We call it “smart compare”.

Requirement 5. Compatibility with the various development environments.
The tools should be a console app and support MacOS (Bash), Linux (Bash), and Windows (Powershell). 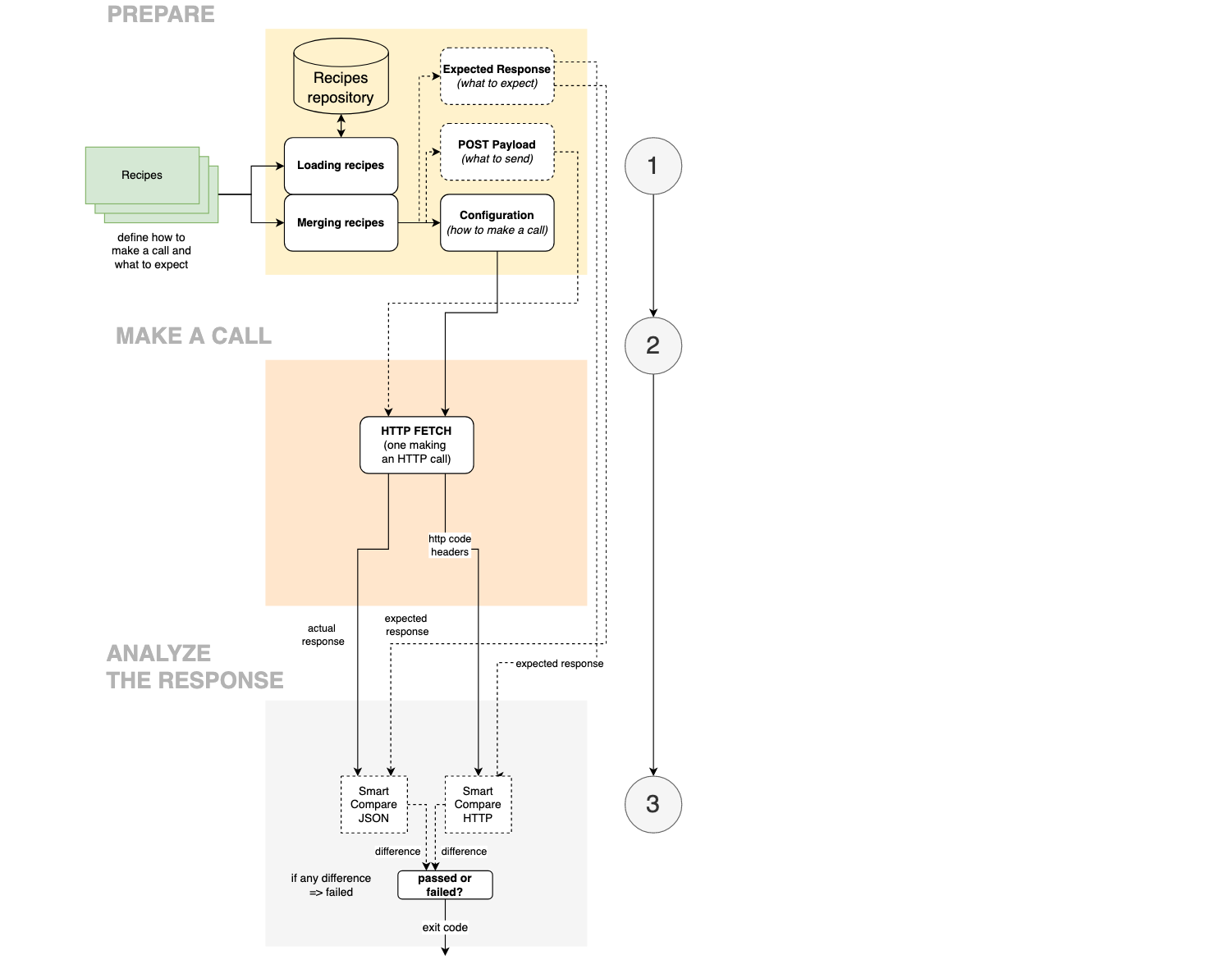 A recipe is a JSON fragment contributing to a payload, an expected response, or a configuration of the HTTP call. It is just a JSON file located in the recipe repository (directory).

A set of recipes define everything that you need to make an HTTP call. What URL to hit, what headers to use, a retries policy, an HTTP method to use, authorization and authentication details.

An app accepts recipes to build a call profile and, separately, recipes to form an expected response.

A recipe is a JSON file. It has two pre-defined root elements,

A `conf` section describes the call profile: everything but the payload

A `payload` section is designed to describe a payload for a call.

Example of a recipe:

Running the test with these three recipes:

Each recipe is just a file in the filesystem, and the path to it is often self-explaining.

So, using separate files is also convenient to track changes in the recipes.

In the parameters, the file extension can be omitted.

In our project, we use recipe groups also called dimensions. The examples of the dimensions:

If we had just three dimensions, our test would have been defined as a point in the three-dimensional space. In our project, we have six dimensions. 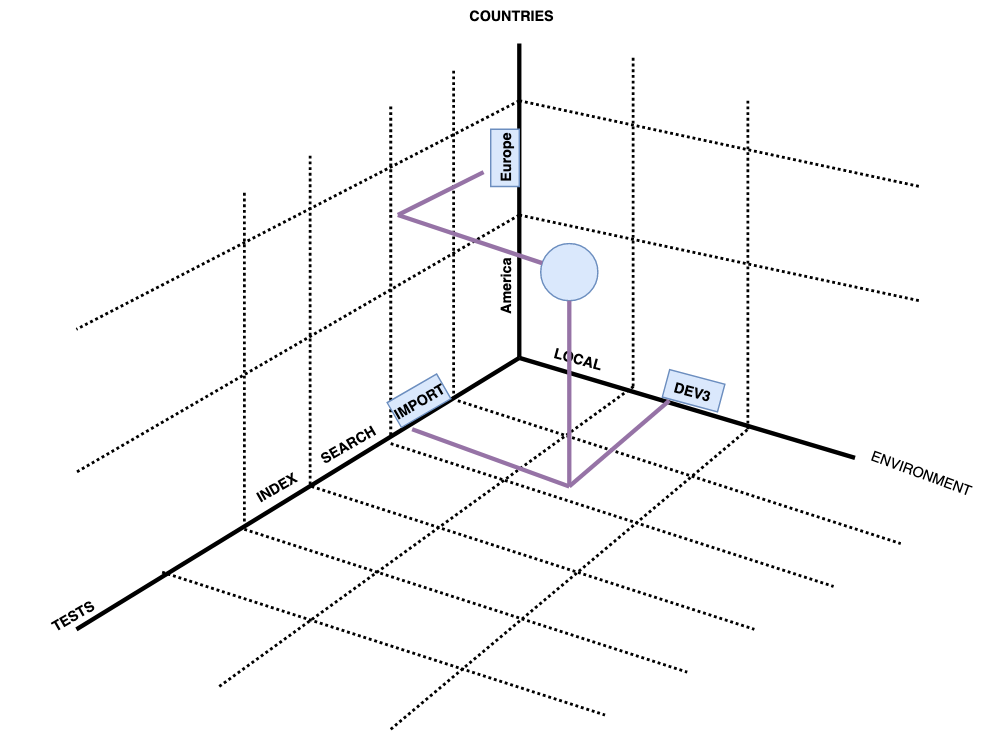 If you use more than one recipe, internally the system merges all of them together to form a single recipe which is used to build a call profile. Typically you need a recipe from each essential dimension.

The JSON structures are merged so that the resulting recipe does not contain duplicates.

JSON arrays are merged so that the resulting recipe may have duplicates unless a modifier (“_replace” or “_unique”) is not specified. 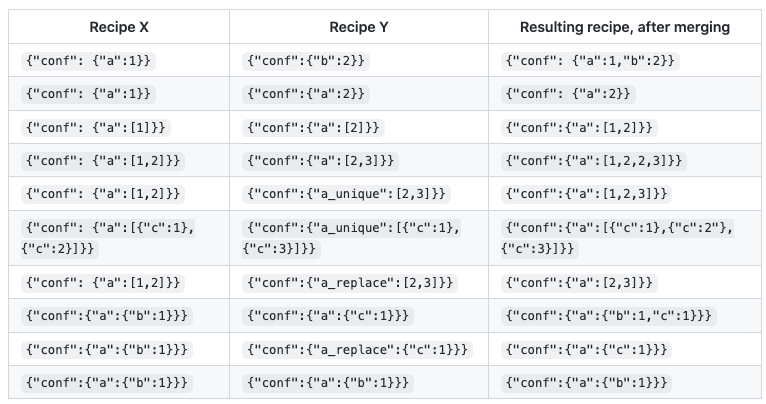 Recipe merging is handy if you need to send similar-looking JSONs to different endpoints.

Additionally, you can merge arrays with the specified unique keys.  A list of unique keys is specified right after the array name: <arr>_unique_<fields-comma-separated>

for example, we have two fragments:

The merged JSON is:

Scenarios help in an easier way to test and evaluate end-to-end complicated problems.

The building blocks of a scenario can be reused in other scenarios.

For example, you may want to test the same sequence for the logged-in user:

As you see, the building blocks are the same, and the same blocks can be reused if such a need arises.

In our current version, we use Bash scripting to organize e2e-cli calls into a scenario. It is not nice because bash is not perfect, but this approach was demonstrated to be very flexible. However, involving bash creates complexity for the Windows users where bash is not installed by default. We use WSL (Windows Subsystem for Linux) to overcome this limitation.

For the example above, the scenario script looks as follows:

Since the post payloads in our project may be very complex, we construct them from the fragments following the same logic as recipe merging:

After merging, the following JSON is generated. It will be sent to the service as a payload:

The system supports specifying POST payloads as parameters of the


the following test will work exactly as

For scenarios, it is important to use some information returned by a service in the subsequent calls. The typical examples are OAuth tokens, cart IDs etc.

For this purpose, there is a concept of storage JSONs. Technically and syntaxically these are just recipes, but writable/updatable.

This command performs a call to the OAuth server and saves `access_token` from the response to the storage JSON:

As you see, the file is of the same syntax as a normal recipe, so it can be used in the subsequent commands such as createCart:

this command creates a shopping cart, and we need to store the generated cart GUIDs. Note that the token is not removed from the storage file when code and anonymousGuid were added:

The recipes having the “conf” section at the root level define the call profile. It has information on what to call and how to make a call.

Below are some of the attributes the system takes into account: 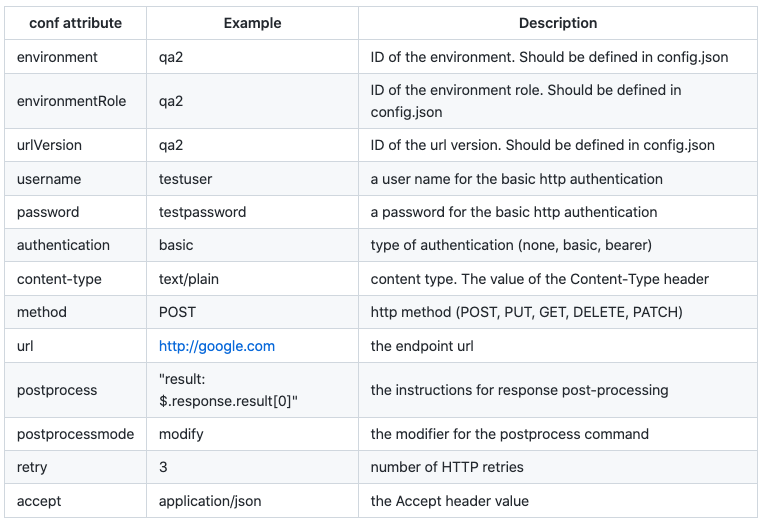 Additionally, the `conf` section can have any number of user-defined attributes. They can be referenced as ${_conf.name} :

Prior to the JSON Smart Compare, the service’s response can be post-processed. For example, some fields can be removed or their value can be replaced.

For example, the following recipe leaves only two fields from the HTTP response. These fields are extracted from the first item of the array.

The format of the postprocess items is the following:

JsonPath expressions refer to a JSON structure in the same way as XPath expression are used in combination with an XML document. See https://jsonpath.com/ for details.

(the JSON is from https://jsonplaceholder.typicode.com/users) 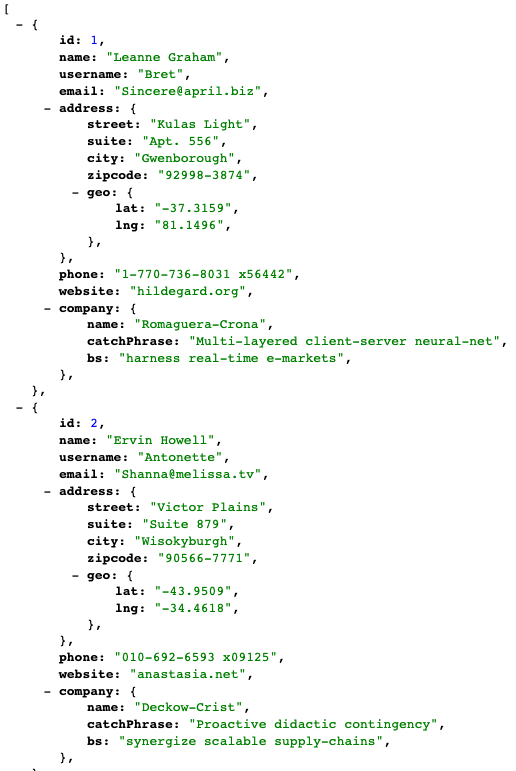 By default, postprocessing leaves only fields listed in the `postprocess` array.

To activate the debugging mode, set the environment variable “verbose” to true:

with this mode on, the system output becomes more detailed, shows the merged JSON, and also builds a `curl` command which can be launched independently.  So, for each e2e-cli test you can get a `curl` command easily just by activating the verbose mode.

For your reference, below are a command and the recipes used for the example above:

The test compares the actual response with the expected response. The latter is built with the same approach as a body payload, via JSON merging.

From the last example (see above) the recipe from the `resprecipe` parameter contains a payload section which has two JSONs. These JSONs are merged, and the resulting JSON is compared with what the service responds with.

the merged JSON will contain both city and zipcode:

The service responds with the JSON containing a list of items (https://jsonplaceholder.typicode.com/users) 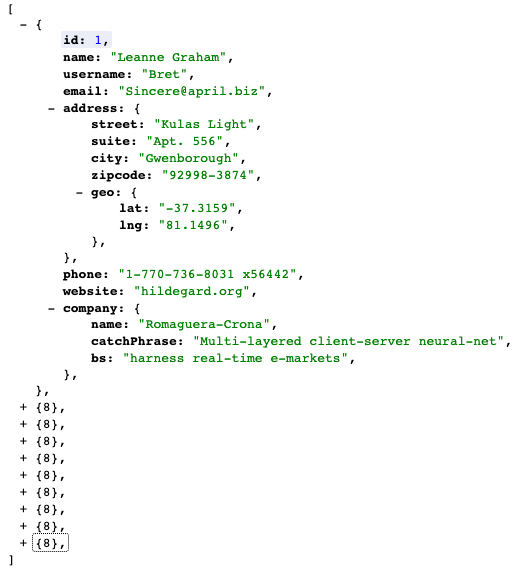 The recipe extracts only two fields from the response (defined by

So the resulting JSON will contain only city and zipcode if they were present in the actual response.

Then the system normalizes both actual and expected JSONs.

Normalization involves rearranging the fields. The algorithm arranges the fields based on the their values, so the JSONs with the same values will have the fields arranged in the same way. After that, the system compares the structures highlighting the differences.

If the fields were arranged in a different order, the report would have been the same because the order of the fields is ignored.

By default, the order of the items of an array is also ignored. This mode can be changed via a command-line parameter.

Overriding recipes from the command line

Although it is not recommended, you can override the recipes from the command line by placing the JSON fragments as a parameter value.

there are three types of overrides:

The overrides help to make quick changes before implementing them as a separate recipe for permanent use.