This article is part of a series on performance testing:

All these APIs are highly customizable, and even smallest changes in configuration, data model or Java code may result in performance degradation. Performance testing is especially important in cases where concurrency may be the source of the problem. To recognize and fix such issues timely, it is recommended to perform regular performance testing, ideally integrated into the build and deployment pipelines.

However, SAP Commerce Cloud intensively uses caching and the test plans may not reflect the true situation if not designed properly. Almost all database queries are cached inside the platform so that the thousands of data fetching operations (per a webservice call) don’t even reach the database. If a cache was disabled, an average single call would take minutes. Fortunately, the cache is always on, but depending on many factors it may or may not work efficiently.

The test scenarios should be designed in such a way that they mimic the real-time user action happening in the production. If your product catalog has thousands of products, and you expect a normal distribution, it will be a bad idea to test the system against just a small bunch of test products. You may face the risk that Commerce Cloud demonstrates exceptional performance with this small bunch of products, but completely different results with the actual traffic.

In order to mimic user behavior, API sample calls can be either generated or collected from the logs. For the APIs, this dataset has a combination of when and what: a timestamp, a list of URLs, an HTTP method, a set of HTTP headers, GET and POST payloads. It is often easier to simplify the model by firing the calls in some pattern reflecting the actual traffic in its average approximations.

When the coronavirus outbreak happened in China, it boosted local e-commerce as many stuck at their homes forced to buy their goods online. Sales of fresh food on JD.com reportedly jumped 215% during the 10-day period and counting. The ability to serve a large number of customers is growing every year. The traffic may be doubled in a week. How to make sure your system is capable to serve high traffic demand? In today’s article I’m sharing my experience with Tsung, a high-performance testing framework.

Jmeter lacks in distributed load especially when it comes to high volumes. A typical JMeter machine is often not sufficient for carrying out the large number of virtual users. This is where Tsung is an interesting alternative.

Tsung is written in Erlang, which is capable to run an extreme number (thousands) of simultaneous users from one machine because of being concurrency-oriented programming language. In Erlang, everything is a process; these processes are strongly isolated, share no resources, and interact with each other only with messages. Erlang programs remind me a swarm of microservices. Unlike Java, where all threads share the same address space so it is possible for one thread to trash things owned by another thread, Erlang’s units of computation are completely cut off from one another.

Such architecture helps to create flexible, reliable, and scalable solutions. For example, RabbitMQ Server, a message broker, is also implemented in Erlang. The chat messaging platform, ejabberd, is written in Erlang as well.

Mickaël Rémond, the lead architect of ejabberd, shared in his blog the details of the performance test of ejabbed. Both ejabberd and Tsung were running on a single Amazon EC2 instance m4.10xlarge (40 vCPU, 160 GiB). The target was to reach 2,000,000 concurrent users chatting with 18 contacts during around 1h. 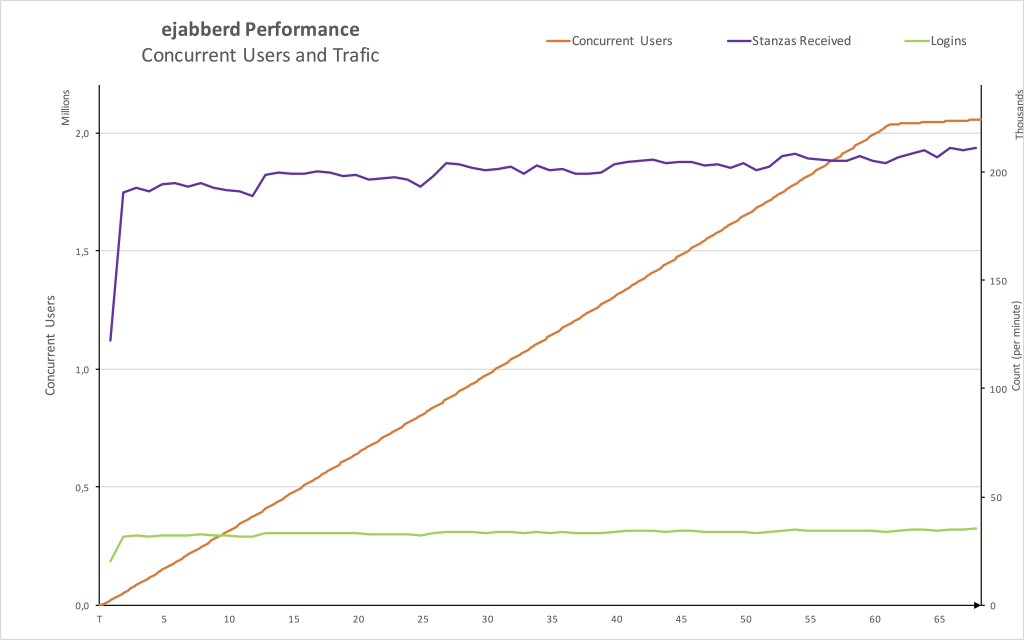 Additionally, it can create a distributed load organizing other “tsungs” in the cluster.  Tsung is designed to be distributed. JMeter uses threads for the purpose that limits its abilities.

According to the report from WIPRO Cloud Testing Practice, Tsung was able to inject up to 45,000-60,000 simultaneous users per agent machine with throuput up to 5000 requests/second, whereas JMeter was able to simulate up to 12000 users and 1000 requests per second (for 4500 users) from the high-performant node 20 ECU, 8 Cores, 7Gb. In the cluster of 11 nodes (each has 8 ECU, 4 Cores, 15Gb), Tsung was able to reach 0.9 million simultaneous users.

In my project, I needed to generate a list of URLs and JSON payloads to get them close to what system will experience after go-live. In my test plan, I needed to read the POST payload from a file and send it as a body for a POST request to the REST API, parse the response, and log the response time along with a response code and webservice response body. I also needed to control the pattern of the load and visualize the results.

You can also read the content of a POST or PUT request from an external file, but normally this filename is static and cannot be generated dynamically as shown above for JMeter.

Unlike JMeter, Tsung doesn’t provide a graphical user interface for test development or execution. All you have is configuration files and shell scripts:

The configuration file requires tsung-1.0.dtd which can be downloaded from the official website.

First, you need to specify to what server(s) we are directing load. For our sample script SAP Commerce Cloud local instance, it is https://localhost:9002 , but normally it is against the best practice. You shouldn’t direct load at the same host because both Tsung and the system will share the same CPUs and memory resources:

A pair of arguments, loglevel=”DEBUG” and dumptraffic=true” are here to see the details of requests in the log file during test development. Next, we need to specify the controller details:

The use_controller_vm attribute means that you don’t want to tsung to connect to another machine, and execute tests from there, and instead run them from the parent process which is controller’s. if you omit this attribute, Tsung will attempt to connect into localmachine by ssh that often results in an permission denied error.

So, with this basic configuration, the tsung client starts the load on the same host and on the same Erlang virtual machine as the controller.

Next section defines the phases of user arrival rates. There are only two tags that are allowed inside the load tag, arrivalphase and user.

Be default, a load phase ends when the specified duration is reached, even if all started sessions are not finished. If you want to start a new phase only after all users in the previous

phase have finished their sessions, use the wait_all_sessions_end attribute of the arrivalphase tag.

You can specify either arrival rate (the arrivalrate attribute) or an interval between arrivals (interarrival).

In the sessions tag you define the actual series of requests that a virtual user will perform.

The subst attribute of the request tag is important here: it enables variable substitutions. The substitutions require double percent signs (%%) on both sides of the variable prefixed with the underscore sign (“_”).

You can’t add the same product into a cart many times, so you need to use a list of products and iterate over them. For this purpose, you can use a combination of FOR and SETDYNVARS:

Inside the loop you can use the %%_counter%% substitution if you feel it useful for debugging purposes.

The constant values can be defined in the same configuration:

The variables defined in such way can be used via double-percent-and-underscore substitutions as well.

When you run a tsung controller, you normally see nothing in the console output. For monitoring the load Tsung provides an embedded web server. It is started by the controller on port 8091:

During the load, Tsung creates the logs. These logs can be visualized using a tsung_stats.pl script.

Tsung has dynamic substitutions to use the variables in the similar way as JMeter:

In the TSUNG configuration file you can specify this as follows:

I defined six phases, each lasting one minute. This is the relevant Tsung load definition:

The test is limited to 10 minutes.

Network Throughput shows the size received and size sent are measured on the ethernet packets sent or received on each hosts during the test.

Server monitoring shows the CPU/memory consumption. It is important that there are no agents on the testing system which could collect the CPU/mem info from it, and the system displays the parameters of the system generating the load.

There is also the summary info on the response codes:

Response time in msec for pages and transactions (a page is a group of requests not separated by a thinktime).

The Request and Connection establishment graph shows mean duration (in msec) of the requests accepted the HTTP connect (blue line) and the true request connection time (in msec, green line).

The delta between these lines show how long the server needs to wait to accept the connection. After increasing the rate from 10/sec to 20/sec, the response time has grown significantly while the connection time increase wasn’t so high. For 10 per second, the server processed the queries almost immediately after accepting the connection. 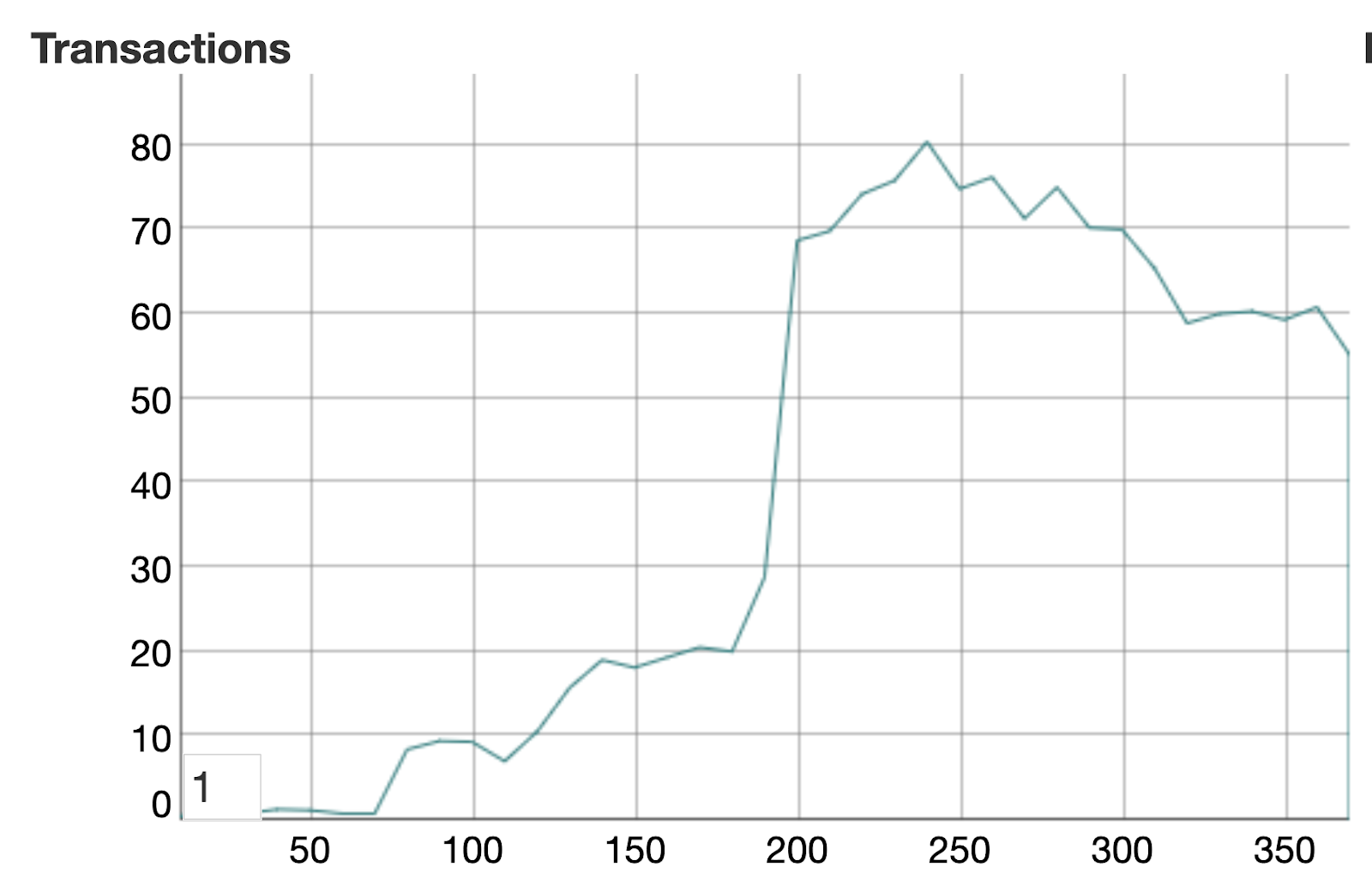 A number of requests is two times more than the number of sessions, because each session has two requests (create cart + get cart). 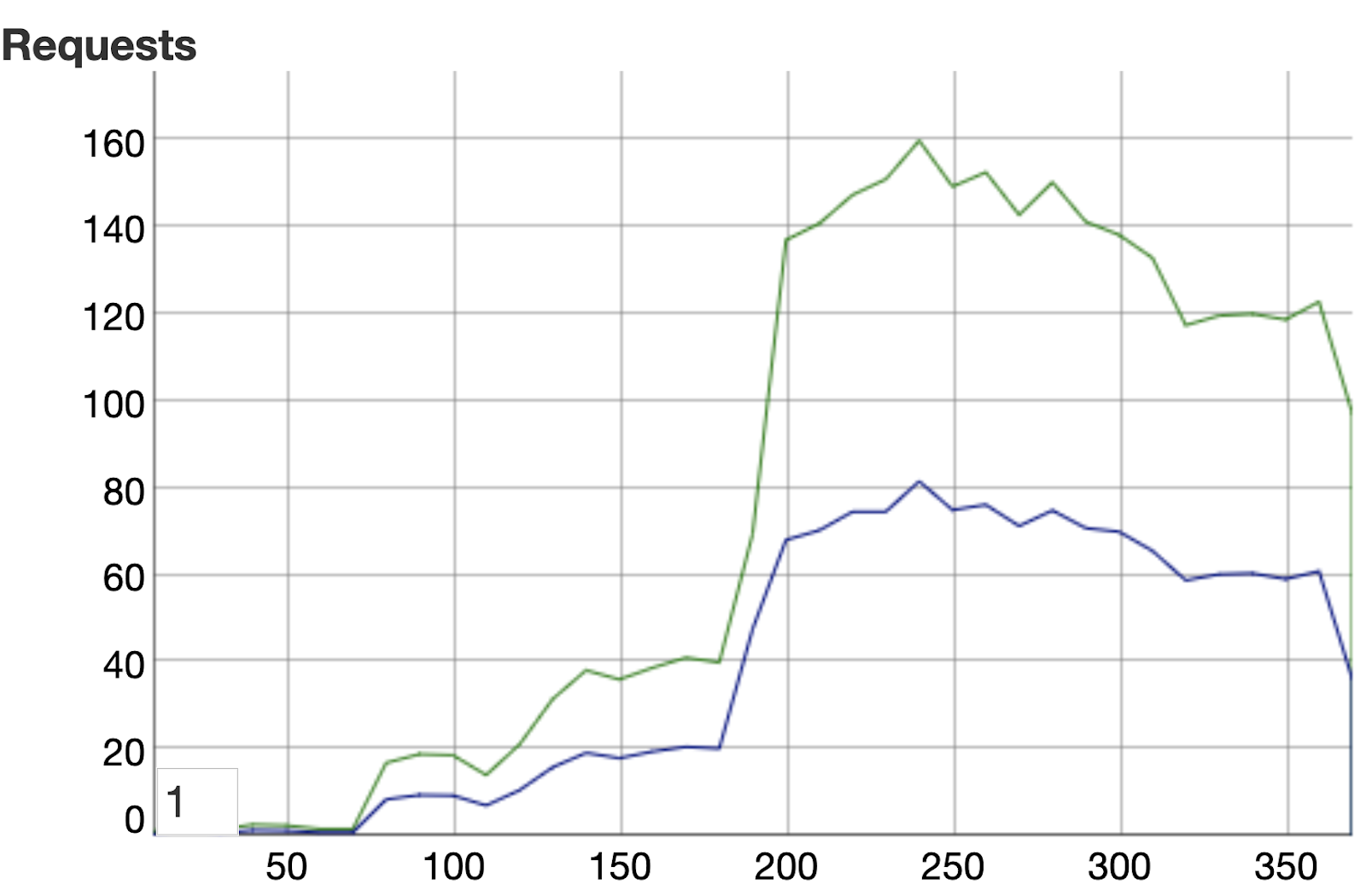 The virtual users are coming one after another. Longer processing time and higher rate increase the number of simultaneous users.

The following graph shows the number of errors detected during the load. Specifically, error_connect_emfile likely means that we are running out of file descriptors (I have 256). The operating system uses file descriptors to handle file-system files as well as pseudo files, such as connections and listener sockets. Because of this limit, we could not go beyond the limit. 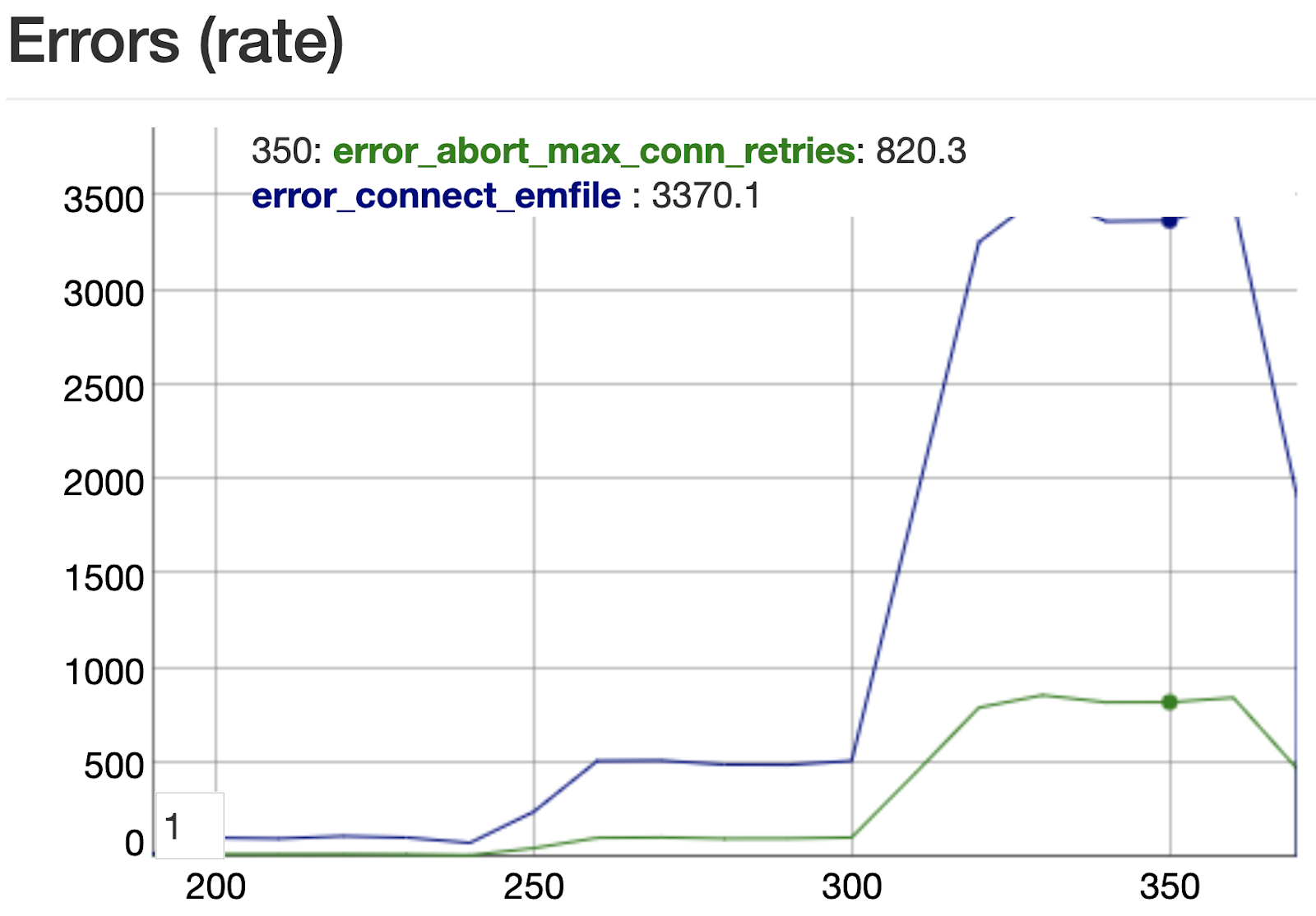 The Tsung’s max number of connection retries is 3, and when its attempts are failed after third retry, it throws this error, and the graph shows their number. The default timeout between retries is 10 seconds.